After waving goodbye to the Innes National Park and some newfound friends, we headed off to see the rest of the Yorke Peninsula. We found a magnificent caravan park at the little town of Coobowie, where we washed clothes, washed ourselves and went fishing. The kids outshone both of us at the Wool Bay Jetty by catching two lovely squid, which were quickly cleaned and made into salt and pepper squid for a mid afternoon snack. Vanessa completely outdid herself by making Campbell an awesome Fish Cake for his 5th birthday and we had some great fish and chips at Port Vincent for his birthday lunch.

After adding an extra night to our stay in Coobowie, three nights were enough and it was time to move on. We decided to swap to the western side of the Yorke Peninsula and head for the mining town of Moonta. On the way to Moonta we stopped at Port Victoria to see a much anticipated Maritime Museum, however, on arrival we were informed it was only open from 2 – 4 on every second Tuesday, but it was a nice town anyway and there was a playground for the kids to expend some energy while we made morning tea. We arrived in Moonta to be greeted at the gates of the Moonta Bay Caravan Park by Brett and Marta and their girls who we had met at the Innes National Park. This was a great surprise and we had a lovely ‘happy hour’ or two with them.

Moonta township hit its peak with the copper mining boom in South Australia and the Cornish workers made it their own. The Tourist Railway was a hit for all of us, but I think the kids favourite thing was the free water splash park next to the caravan park. I also managed to get some fishing done, but with no luck, although I did manage to get a few Blue Swimmer Crabs in the crab net.

We also met another wonderful family in Moonta: Peter, Annie, Liam and Mia or better known in the Facebook travel blog circles as Four Hands in a Tin Can. It was amazing meeting these guys who are travelling indefinitely. Liam even managed to goad me into getting my drone out and actually using it. 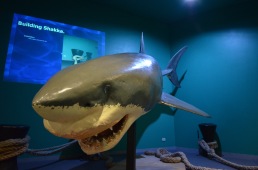 From Moonta we headed up to Port Pirie to collect mail and see a little bit of the town – we also ran into Four Hands in a Tin can again – and then proceeded to drive into a roaring headwind for a hour or so until arriving for at Mt Remarkable National Park. It was a relief to get there as it was somewhat protected from the strong hot northerlies that were belting SA at the time. Mt Remarkable was a very pretty spot to stay a couple of nights and do a little bit of exploring in the far south of the Flinders Ranges. It would be nice to come here in the cooler months to do a few of the hikes that were on offer. The kids and I managed to get in a small bush walk in amongst the ‘Wira’ or Red Gums that lined the dry riverbed near the campground and we got up close to quite a few Lace Monitors. 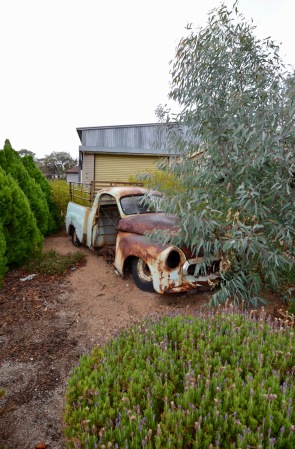 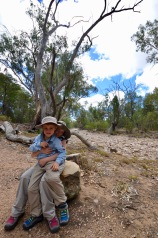 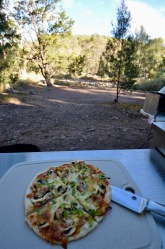 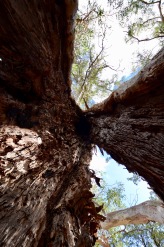 3 Replies to “Week 4 – The Rest of the Yorke Peninsula”