As things always go with a trip like this, the 400km detour to Esperance and the plan to visit Cape Arid changed to driving straight out to Cape Le Grand National Park at sparrows call to get a campsite at the more desirable Le Grand Campsite.

There are two ways to get to the National Park…the boring and normal blacktop and the exciting and we’ll say ‘dangerous’ sand highway. So of course we chose the sand hwy. After reading the warning signs on beach driving, letting out some air in the tyres, we braved the sea and the sand. Lucky we did this as we were able to secure the last two sites at Le Grand at only 8:30 am! As we set up we had to feel sorry for the 5 other campers trying to get a site later in the morning. 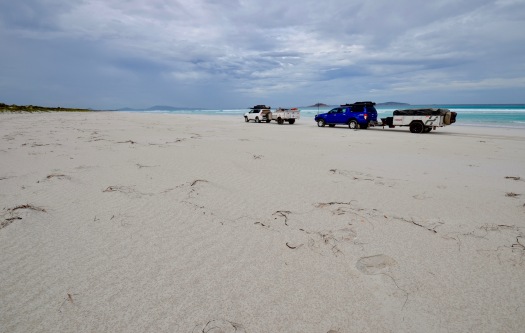 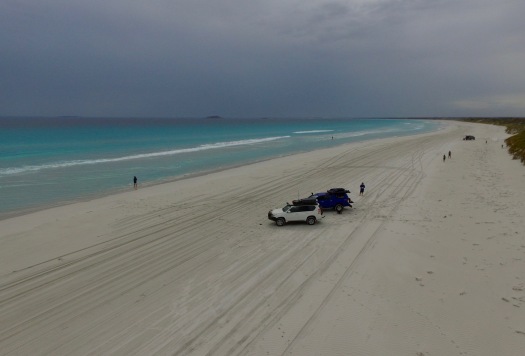 Cape Le Grand National Park is stunning. We were awed with the beach on the drive in, and the most popular beach is definitely Lucky Bay but we soon found a more stunning and magical beach called Thistle Cove. This beach had the finest and whitest sand I have ever seen. The waves were turquoise and see through, it was that clear. There were the reddish rocks to frame the beach and best of all it was virtually deserted. I marvelled at the sand, it was like playing with wet cornflour, you couldn’t build a sand castle rather it is a drip formation, which was much cooler!

We succeeded at climbing the majestic ‘Frenchmans Peak’. This is a grade 5 walk due to the sheer granite slope that you have to climb. While we were a little nervous of the kids and their tendencies to NOT follow instruction, we did make it and the view was worth the climb. 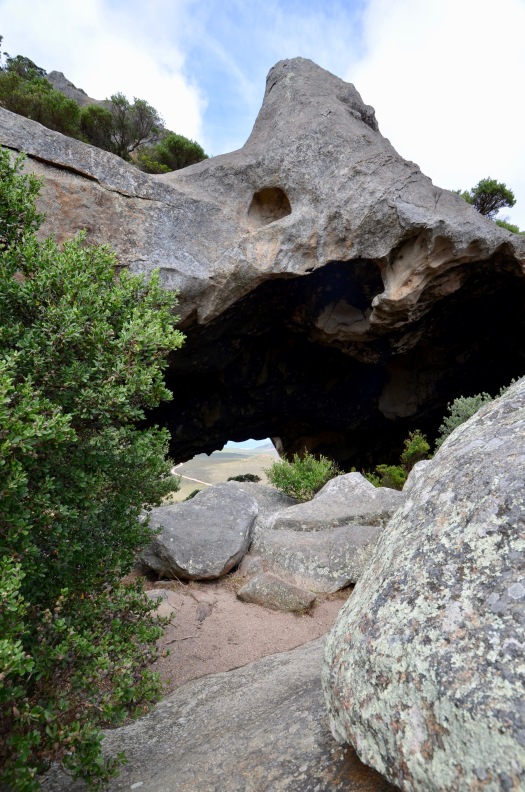 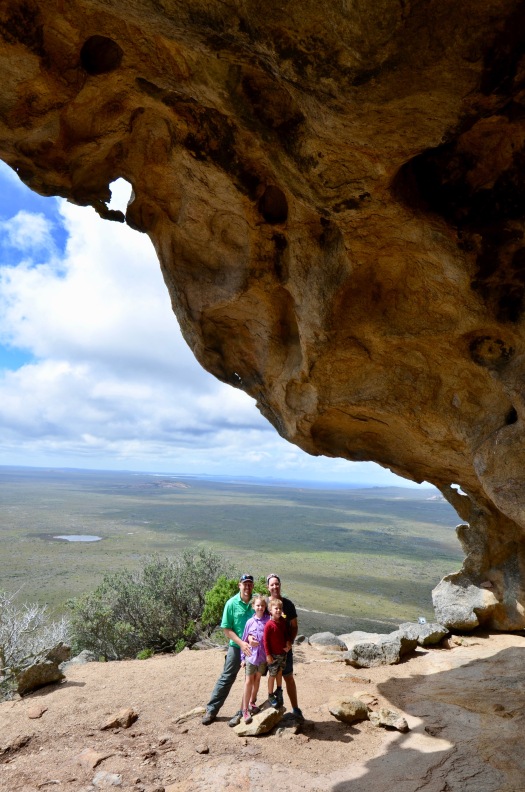 We were sorry to leave Cape Le Grand, however we were less sorry to see the last of the mice that had eaten through our food and paid us a little midnight visit inside out tent!!

We passed through Esperance again on our way to Hyden, the home of the famous WA Wave Rock. The Rock itself is only part of the bigger Hyden Rock, which in turn is part of a bigger group of formations in the area. The caravan park was right at the base of the rock and we were very comfortable and happy camping out back inland. A short stroll and we were on the iconic wave and luckily we almost had the place to ourselves. We wandered over and around the area, marvelling at the funny walk of the Painted Dragon, the local lizard species. We also journeyed out to the Mulka Cave, to see the painted handprints and further out to see the State Barrier Fence, previously known as the Rabbit Proof Fence. This place was a little gem and we extended our stay one more night. 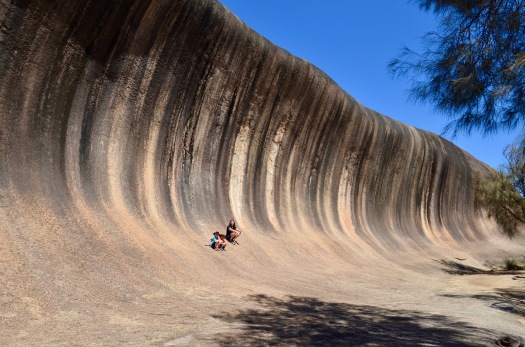 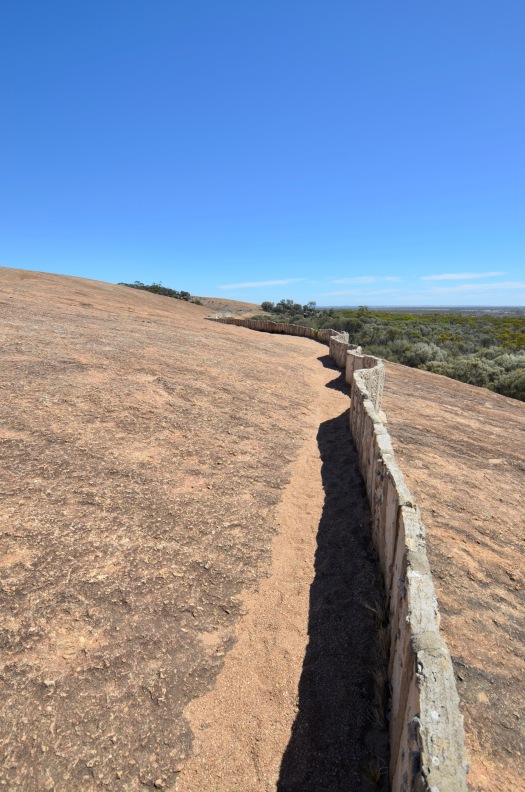 A chance conversation informed us that our next planned spot, St Marys Inlet at Fitzgerald River National Park was experiencing a mouse issue, therefore we were NOT going to stay there, but we did manage a day trip our there and it was beautiful. Point Ann was also the start of the State Barrier Fence No. 2 which was the inner fence to the one we saw our at Hyden. We stayed at Bremer Bay, which was a lovely sleepy little town which would be pumping in tourist season. The caravan park here was lovely, but please note that there are a few rules, particularly when it comes to fire pits. Again this place is a little gem, with the most amazing and stunning beaches. Unfortunately the weather was not conducive to water play, however Craig did brave the waves to do a little bit of snorkelling. Looking forward to warmer water and playing in the waves and under the sea further up the WA coast. 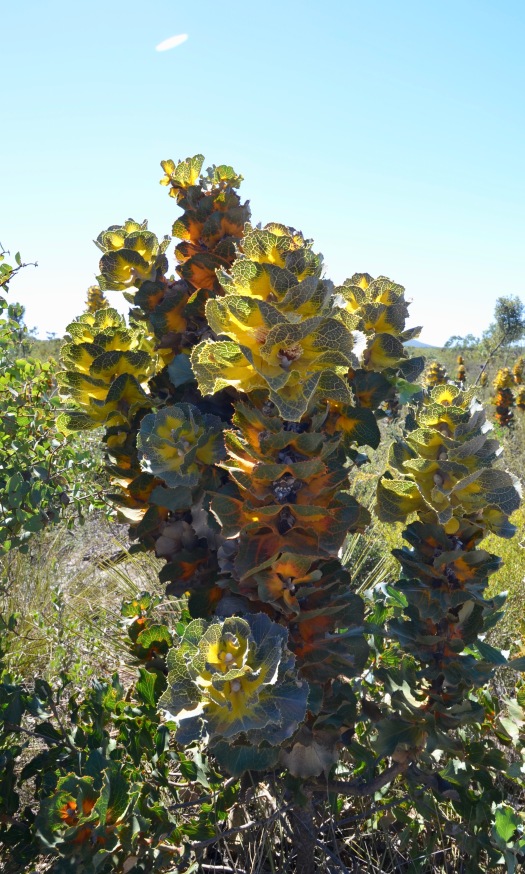