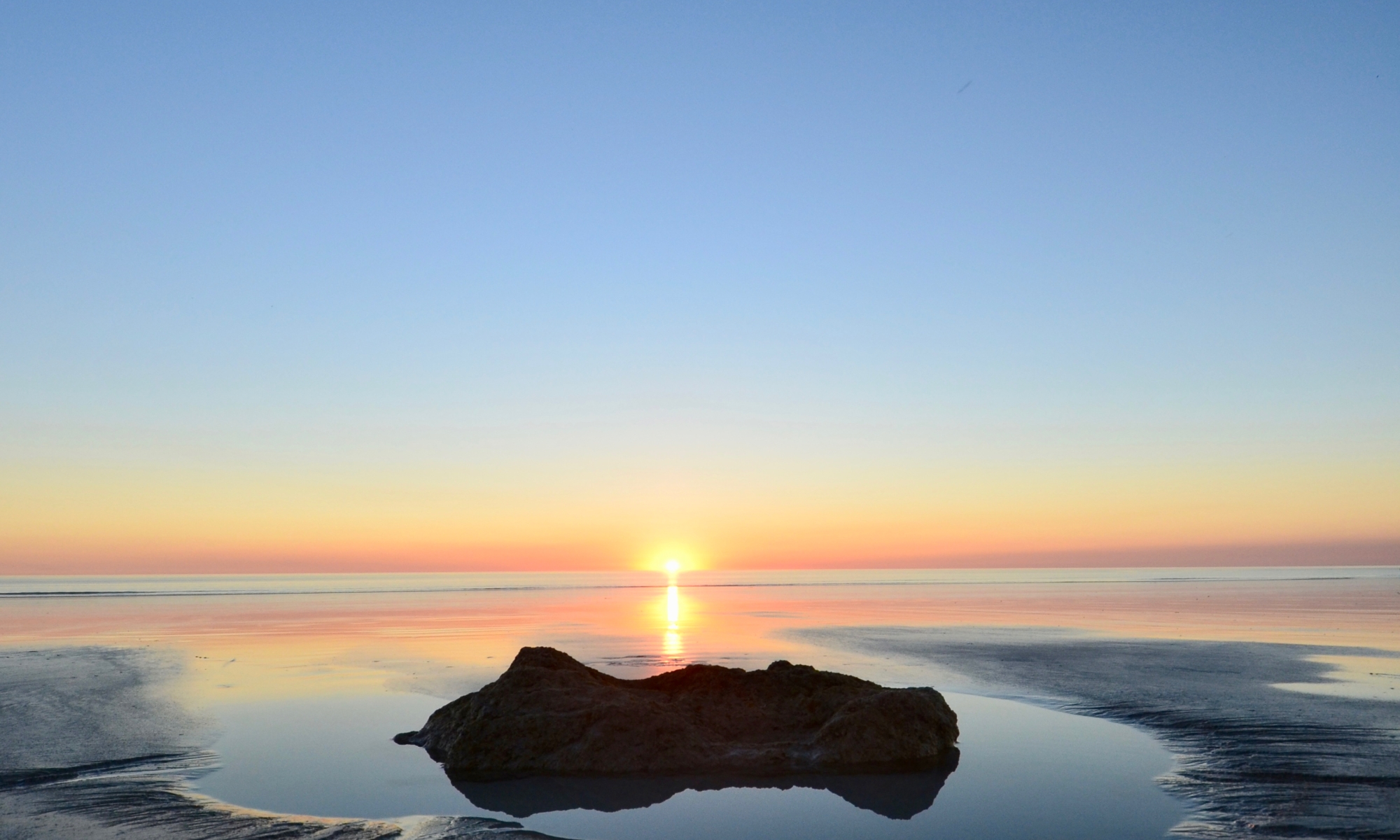 Well there could be worse places to get stuck… 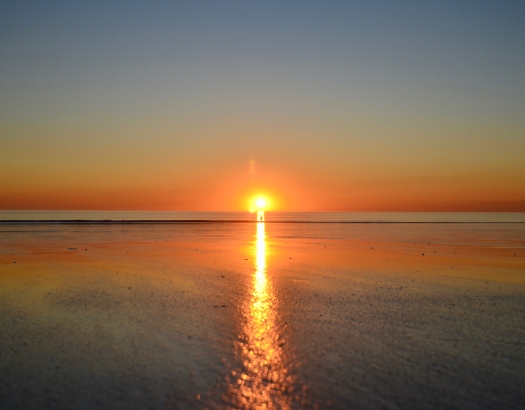 Broome has been a fairly social affair. We had a lovely lunch sitting out over the bay at Mangrove Hotel with Belinda, our friend from Cradle Mountain. Great to catch up after so long. The next day, Brett, of Macs Tracks fame, conveniently had a great excuse to have a session at the famous Broome Brewery. Needless to say we tried all the beers, ginger beers and loved the Angry Ranger the chilli ginger beer. The next day was a little slow. Just catching up with jobs such as getting the car serviced and doing some shopping. 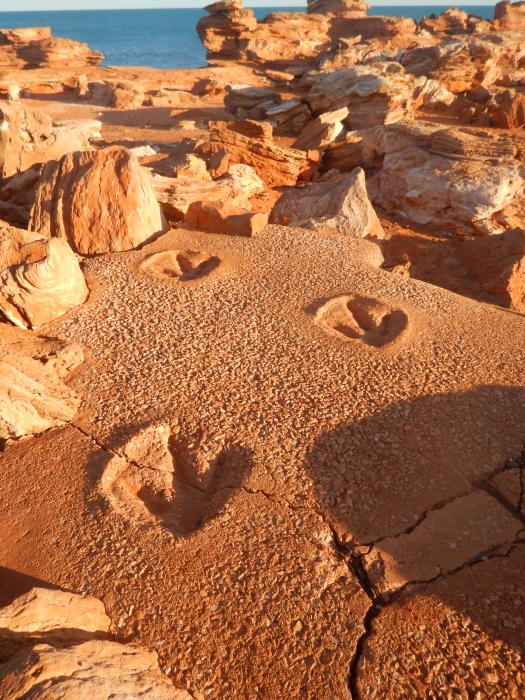 On Tuesday we began the day at 4:45am as we were being picked up at 5:30 for our long awaited tour of the Horizontal Falls, Cape Leveque and Beagle Bay. We had opted for the 4wd bus up to Cape Leveque. First stop was Beagle Bay, an Aboriginal Community. The highlight here was the amazing pearl shell decoration in the church. A quick cuppa and then back on the bus heading for Kooljaman Camp at the top of the peninsula. Here were indulged in some breakfast and a quick look around the beach with the red cliffs and white sand. Back on the bus to visit an aquaculture farm to hand feed some fish. Campbell was pretty brave to feed the Barramundi, as they were pretty feisty. From here it was straight to the One Arm Point airport to board the little floatplane. This was very exciting for both Campbell and Lily, however Ness was beyond nervous at the though of being on a small plane. While it was a little bumpy, the view over the Buccaneer Archipelago was amazing. The water was so clear that you could see the whirlpools and tidal changes from the plan. The flight took us over the Horizontal Falls so we could see it from the air and showing what an amazing formation it was. 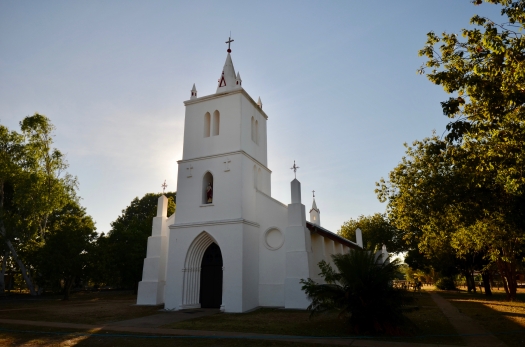 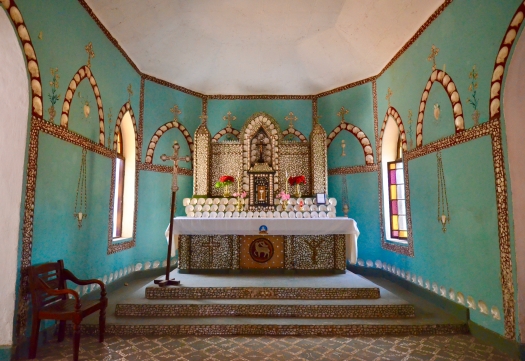 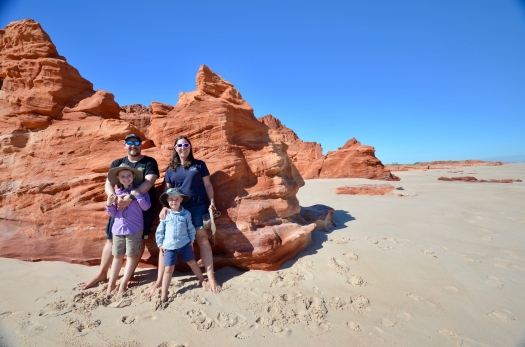 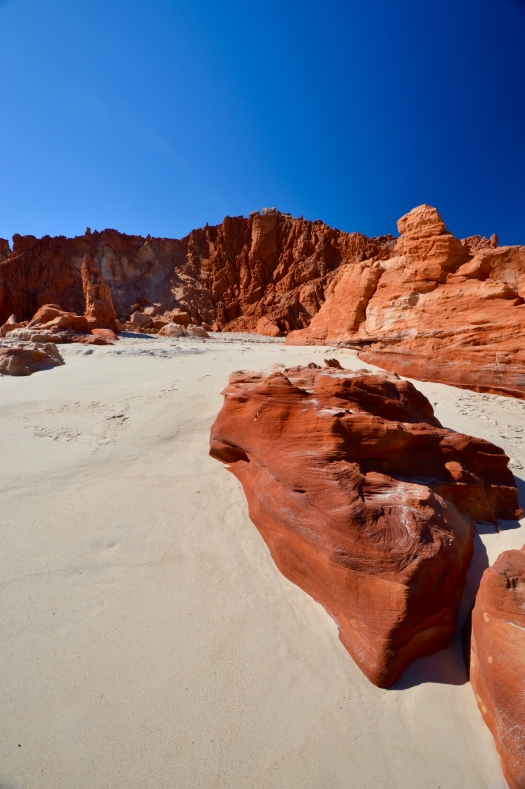 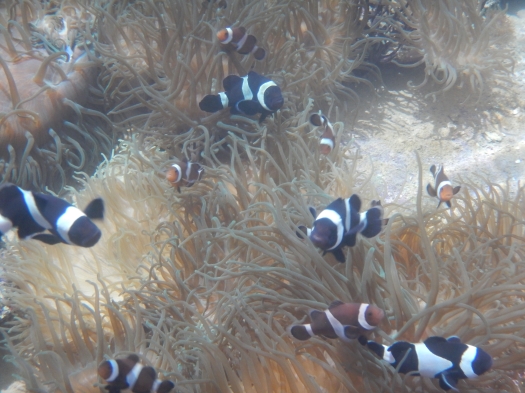 We landed on the waters of Talbot Bay where the Tour Company have a fairly large moored pontoon, complete with accommodation, helipads and swimming cages. The cages were there for a pretty good reason, Tawny Nurse Sharks. These sharks are wild but have been encouraged to come up to the pontoon and be man-handled for the tourists. Campbell, Lily and Ness jumped into the swimming cage to get a close look, but the view from up top was just as good. After a quick lunch of freshly caught Barramundi and salad, we jumped into the boats to get up close with the Horizontal Falls. The drop as we sped through the falls was about 1.5 to 2 metres and caugh me off guard on the first run through and I ended up with a pretty good bruise on my leg as I landed pretty hard on the arm of the seat. We spent nearly an hour going in and out of both sets of falls before heading off on a cruise through Cyclone Creek, viewing the spectacular gorges and rock formations in the area.. 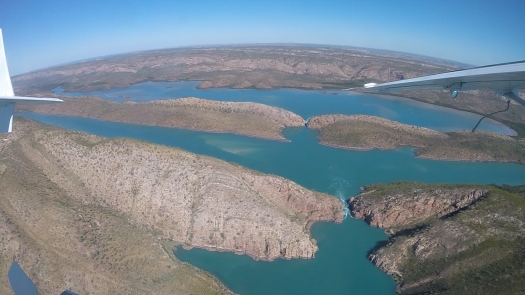 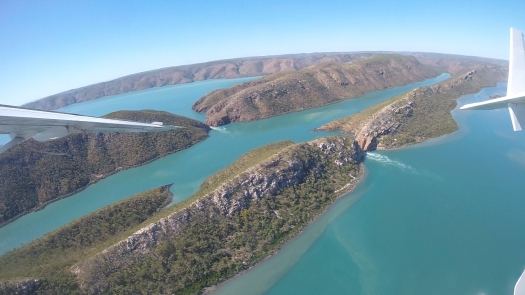 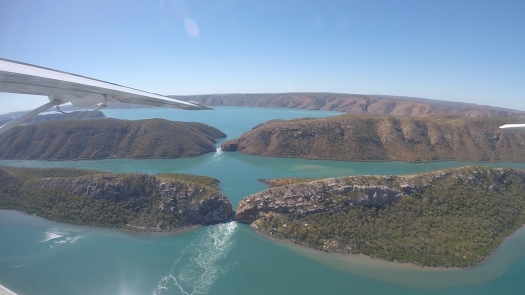 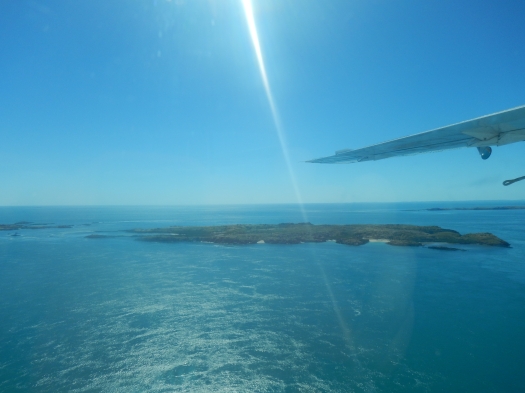 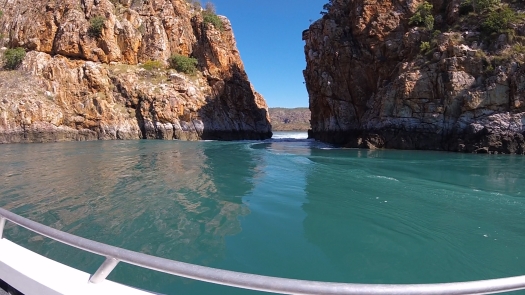 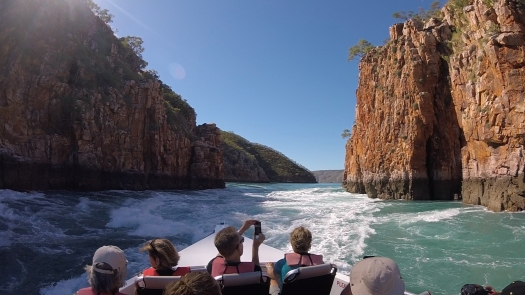 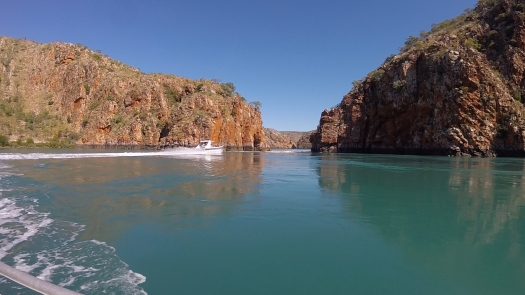 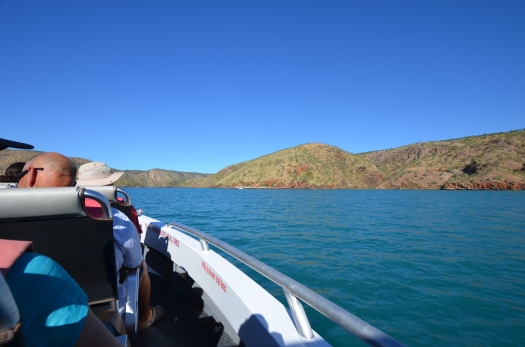 It was then time to get back aboard the floatplane and head back to Broome, this flight was a much smoother and at a much higher altitude than the low level flight out to the falls. The areas we flew over were apparently defence lands where they do significant training activities. After a long day both the kids fell asleep on the plane and only woke up to see us touch down.

The next day was a very quiet day hanging out at the caravan park and swimming in the now open pool. In the evening we went to Sun Pictures outdoor cinema to watch The Incredibles 2. The cinema is apparently the worlds oldest working outdoor cinema, it was a great experience to see the planes flying over as we watched the movie. 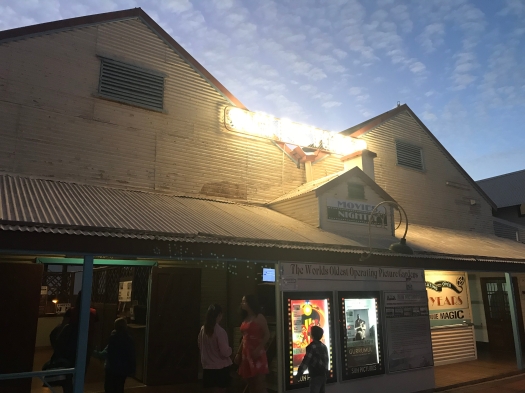 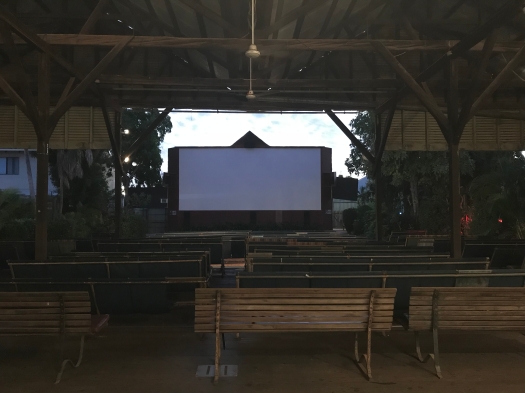 On the Thursday we were booked in to do a tour of the Willie Creek Pearl Farm, so another early start for the drive a little way up the peninsula to the farm. The tour was great with a nice morning tea and included a boat ride out to some of the oyster long lines to see the racks that hold the oysters and the cultured pearls. We also met another family from Sydney and hit it off pretty well with Dave, Katie, Taya and Zoe. After the pearly farm tour, we headed up the peninsula a bit further to James Price Point to check out the area and for me to finally visit the area that took up nearly 12 – 18 months of my working life a few years ago. From James Price Point we headed to the Malcolm Douglas Croc Farm. This was a highlight to set so close to the crocs and see them being fed, it is a just another must do when you are in the area. It was also lucky for us that there was a night market at the town beach that night, so dinner was soreted. 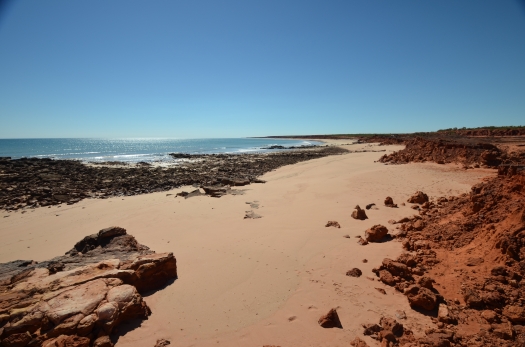 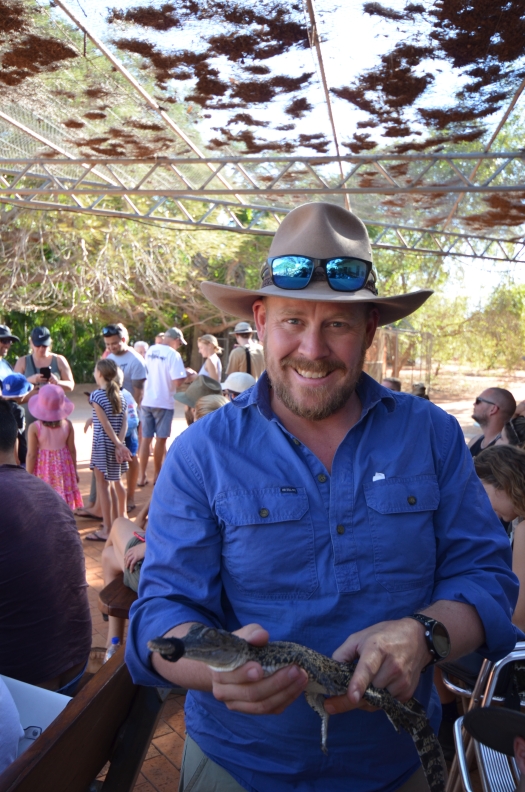 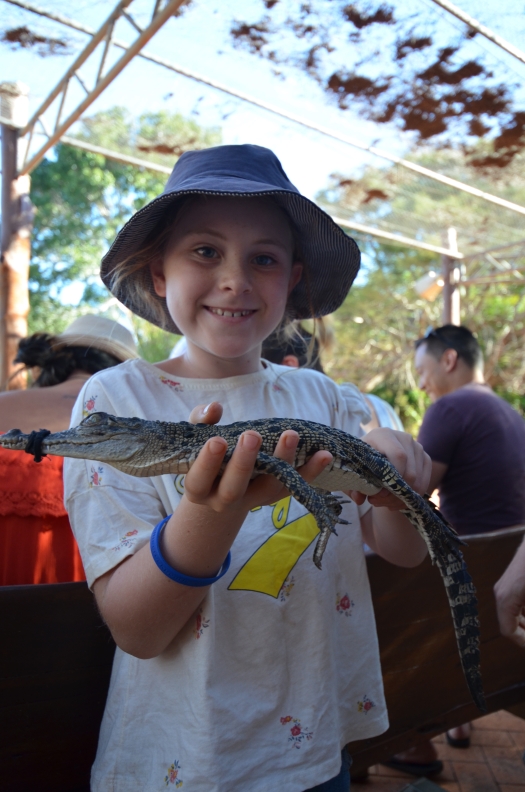 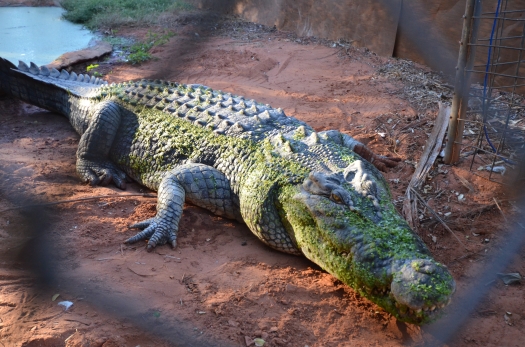 Friday started off not so great, we noticed that our Engel freezer had the power cord knocked out of the power outlet and had started to defrost. We lost a few hundred dollars of food that we had prepared for the Gibb River Road. This was not good as most of it was prepared chicken, ham and such. As we were expecting to start the Gibb on Saturday I headed off into town to fill a gas bottle after this was when the day started to get worse. The Ranger started to miss and stall, it had done this a few times in the past few months and I limped it straight back to the mechanics where I had been on Monday and they put the computer on it and took it for a drive. It was found that it had a faulty Crankshaft Angle Sensor and it would take until Monday or Tuesday to get one from Perth. Looks like we were stuck. It was then a rush back to the caravan park to try to get us booked in for a few more days, luckily they were able to fit us in for another couple of days but we had to change sites and we had to be out on Monday morning. It was now time to put in a SOS call to our old friend Belinda to see if we could crash at her place for a few nights while it all got sorted. A big thanks to Belinda for letting us use her place even with her not there, luckily she didn’t have to deal with the kids! Friday evening was quite an experience though, getting to ride the camels on Cable Beach.

On Sunday we headed down to the RSL to catch all the action of the Crab Races.

Finally on Tuesday we had a working car, a trailer with serviced wheel bearings, and a fridge full of food and are ready to hit the Gibb.