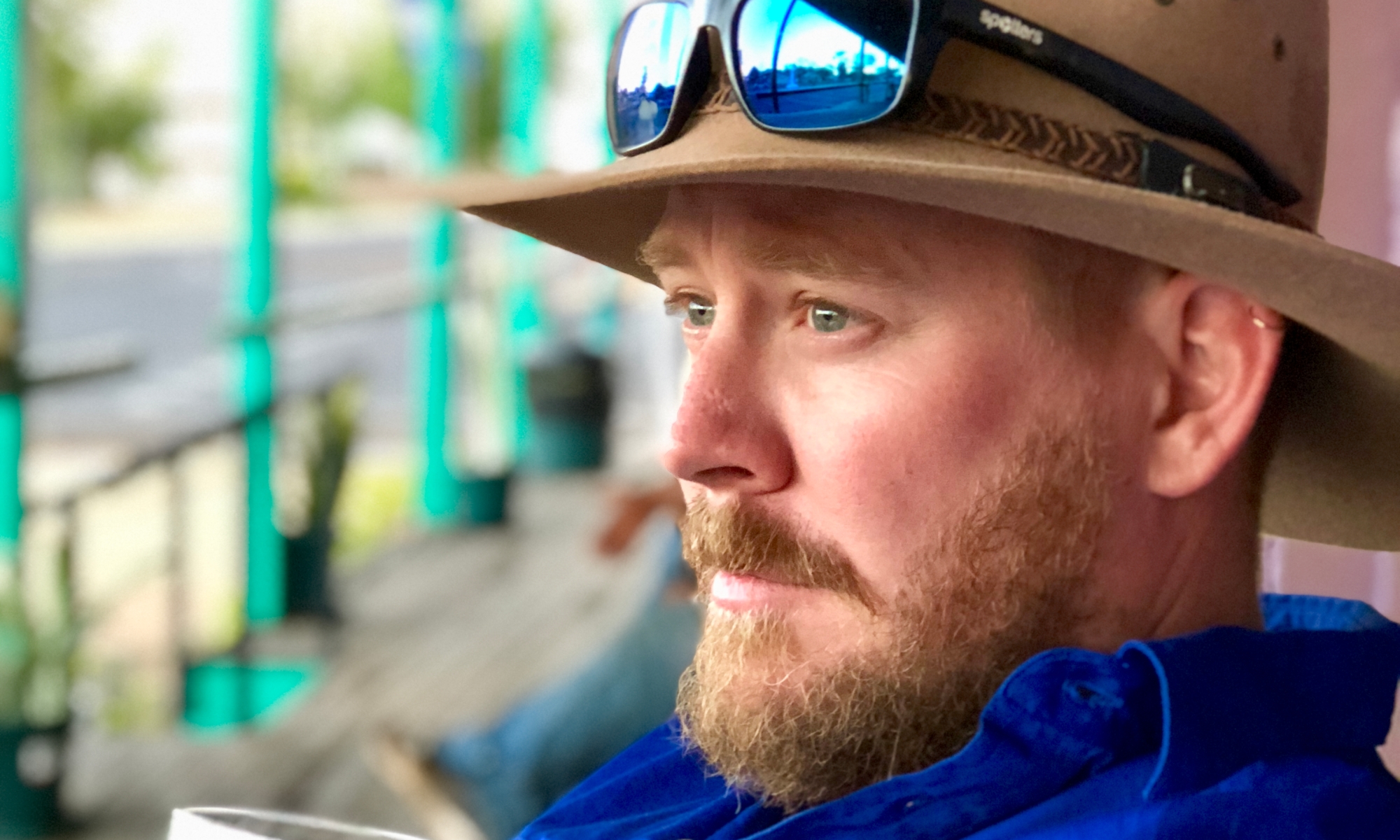 NB:  We have been a fair distance from Week 31, however we have been remote with little reception to post the blogs. I hope you enjoy the belated travel info.

So we had decided not to travel the Savannah Way in its entirety, due to news of adverse road conditions reports and the lack of water in the swimming spots. The first stop was the border of NT and QLD and onto the funny named town of Camooweal. This place was good for fuel, a lunch spot and to fill up with water before turning off the hwy towards Lawn Hill and Adels Grove. This was a long dirty bumpy road and we were glad to see the sign to Adels Grove, even more so as it had a restaurant and a bar!

This was a great little spot and we were able to relax a little and enjoy the area. While it was quite dry there was still water around and the kids were straight into the little swimming hole. They declared it to be “cold but refreshing!” Later that afternoon we all hung out at the bar and played UNO (Lily was beating us all!)

Day two and we were back on the road to retrace our footsteps to the Riversleigh World Heritage Area. This was a place of major significance for fossils of mega fauna and other ancient animals. The main finds were a leg bone of a giant emu, a cross section of a turtle shell and a tiny part of a crocodiles’ leg bone. There were thousands of fossils everywhere you looked, and while they were not identifiable to any articular animal it was fun to have a guess.

Next up was Lawn Hill/Boodjamulla National Park well known for the walks and being able to canoe up the gorge. Thinking that we should be energetic before hitting the water, we headed out and up to a headland walk called the ‘Island Stack’. This took us high above the river where we were able to see the landscape and the gorge. Despite the dizzying heights and the steel grips on the kids, the highlight of this walk was seeing two monster barra just chilling out in the river. Unfortunately for Craig this area was a no fishing zone and by the size of the barra it had been a no fishing zone for a while.

After lunch, we headed back out to experience the gorge by canoe. Packing ourselves into a three-seater canoe with camera gear, food and drinks was pretty tight but we managed to launch safely. The water was an interesting milky blue/green colour, which made the area look really unusual and pretty with the water lilies and green banks. Gliding through the water was so peaceful that it was easy to forget that there were likely to be fresh water crocodiles beneath the surface. The gorge was beautiful with high walls and great plants. It took us an hour to paddle up to the first waterfall where we had to pull the canoe out and drag it around to the next part of the gorge, which was not easy! More paddling had us up as far as we could go so we got out and had a look around. The water poured through gaps in the trees and rocks so much so that there was almost a swim spa experience. Craig, Campbell and Lily got in for a swim, but I still had visions of crocs so I stayed out of the water. On our way back down stream, we stopped at the bigger waterfall for a swim and a rest. The kids were a little nervous of getting in because of the tufa scum that was on the top of the water. But after Craig dive-bombed in there was no scum left and the kids were straight in.

We had another couple of days at this relaxing part of the world before packing up and heading north-east. The drive to Burketown was a little boring, but the little town made up for it with pretty good meat pies and a great little museum. We stopped by the local artesian bore, but it looked like it was being used to scold the feathers off magpie geese and wasn’t very exciting. So onwards we go.

Normanton was a big surprise for us as we were expecting a quiet little town with not much to do. Lucky for us we got there at the right time of year because the town was very busy with a school fete, races and the rodeo. We also visited Karumba to sample the fish and chips and take in the view of the Gulf waters. I also just wanted to say that we went “by Karumba” (say it put loud, I know you want to!)

Friday night we hit the school fete for cakes, playing on the jumping castle and spending too much on the lucky dips. It was great to see the community coming together to support the school and the kids. We decided that we had to eat dinner at the purple pub.

The next day we hit the races. These were quarterhorse sprints rather than the typical horse races and it appeared that anyone could enter. What we didn’t expect was the seriousness of this event. There were fashions on the field to rival Flemington, standard betting and a Calcutta before each race which was fast and furious. The horses themselves were pocket rockets and were amazing. Such a great event and was definitely one of the events of the year for the town. We went back to the caravan park for a rest and a swim to refresh before heading out again to the rodeo that night.

Normanton rodeo was the best night we have had for ages! Everyone was dressed in boots, jeans, bright shirts and big hats, even the kids. Cars were pulled up close to the fence and the grandstand was full. We watched the barrel racing with girls and guys of all ages which was fast and furious. The speed of these horses and riders took our breath away (or it could have been the dust they kicked up).

Next up was the steer, bull and bronco riding. And oh, my, there is no way I would ever get onto a steer, bull or crazy horse. These guys were amazing as they took hits and falls in their stride.

One bloke did get more injured but he walked it off. It was interesting to see the workings of a rodeo as most people think it is about the competitors and animals, but I thought the marshals and the guys catching the bulls and horses after the event were more impressive. So with bellies full of beers (lemonade for the kids) and pizza, we left feeling satisfied and truly impressed with the community spirit and the skills of the riders and animals. Also we left because a fairly decent fight broke out and the bar closed.

Normanton was also the home to Krys, the 8.60m crocodile shot near here. Apparently the cocodile is the largest ever caught and the scale model was very impressive. So we left Normanton glad that we were able to experience the high life and excitement of the races and the rodeo. We plan to drive the Dixie track up to Lakefield National Park to meet up with Dom, Kate and Jackson. 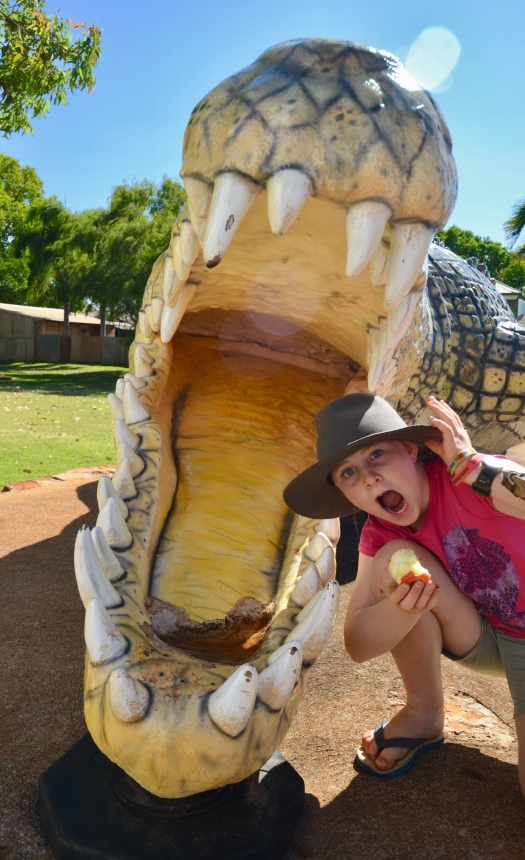